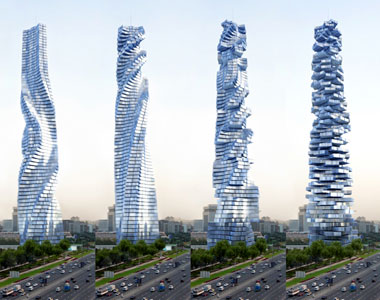 Imagine an 80-floor tower that changes shape… Constantly, rotating, every second. Not the whole building, but each and every floor of it, on it’s own, rotating in it’s own direction, as desired. How much energy would such a building require, if it is possible that is. What would you say if Mr. David Fisher, it’s designer, is going to have the building powers it self? By placing giant wind turbines between the floors, in addition to the solar panel powers, the building will not only have enough energy for it self, but it’s going to power the buildings around it as well! And if all of this seems like a mission impossible to accomplish, the team behind it have made the design even easier than ever for construction, allowing for first time offices to be completely built in the factory, and then attached to the building, decreasing construction time, hazard, cost, and workers on-site.

Watch all of this and more in the video below.

For more of such magnificent designs of the future, including the floating iceberg hotel, new Barcelona Stadium, and more… check out conceirge.com.